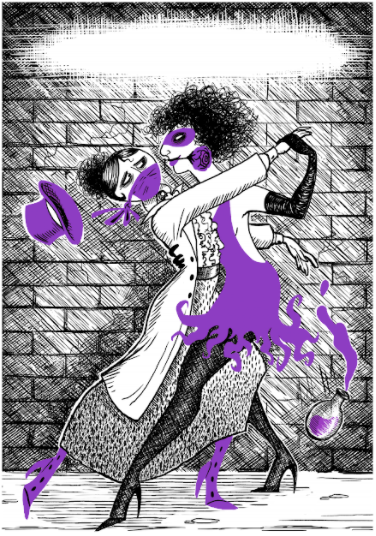 Brief: Illustrations and graphic design for Dracula’s Feast, a tabletop card game of hidden identities and deduction from Jellybean Games. In the narrative of the game, Dracula is throwing a masquerade ball for the human townspeople, to be followed by a feast… though funnily enough, when the townspeople arrive, there’s no food to be seen. Strange! Dracula is all set for a good feed, but a bunch of other hungry monsters crashed the ball in (admittedly flimsy) disguises, with an eye to filching some of that sweet juicy human for themselves.

The midcentury gothic illustrations of Edward Gorey were the primary style touchstone for this project. With such a black-and-white style, my greatest challenge was to find a way to keep the cards from blending together, and to strongly differentiate one character from another, as identification of roles is a core mechanic of the game. I emphasized the differences from character to character by always using a different texture/pattern for the background, but the use of a single bold colour as a visual signature for each character was the main solution I brought to the table, and it’s effective while still maintaining that odd Gorey mix of horror and silliness.

I’m proud of the work I did on this project.